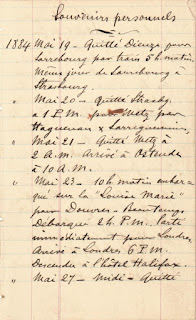 Wow!  This is truly a treasure, even if it isn't for my family.  I do wish I had something like this for my own ancestors, though.  Among the items I received in my "treasure chest" is Jean La Forêt's diary (or journal), with entries running from May 19, 1884 to May 11, 1909.  The book is not complete; it is missing the front and back covers, and a small piece of the page preceding the first one shown here is still attached, so I know I don't have the beginning.  The pages appear to have been perfect bound originally with twine; each page has four small indentations/holes where the binding would have been.  The pages are 3 1/2" x 5 7/8" and lined.  They're a yellowish tone that might be faded from white.  Most of the entries are in French.  I've decided to transcribe (and translate, where needed) four pages per post. 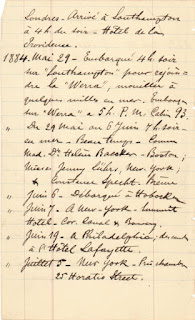 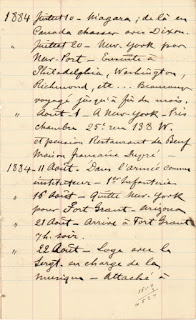 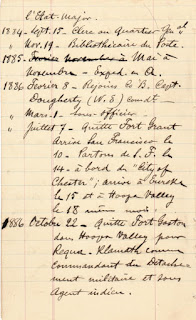 " June 19 – To Philadelphia; stayed at the Hotel Lafayette.

1884 July 10 – Niagara; from there around Canada hunting with Dixon.

" July 20 – New York via New Port – Then to Philadelphia, Washington, Richmond, etc.  A lot of traveling until the end of the month.

1884 September 15 – Clerk for the Quartermaster General

1886 October 22 – Left Fort Gaston in the Hoopa Valley for Requa, Klamath as commanding officer of the military detachment and Indian agent.

I love the detail in Jean's diary.  He wrote the exact times things happened, the names of ships, even the hotels where he stayed.  There are definitely gaps in the timeline, but who cares?  This is great stuff!

We know from the third reference letter that Jean left his last positions in Dieuze on May 1.  It looks like he did so planning to go to the United States, because two and a half weeks later he left Dieuze on his multistage journey.  It took almost a month from his departure from Dieuze to his arrival in Hoboken, New Jersey.  This is pretty close to what Emma stated on her application for an emergency passport.

Jean did some sightseeing in the U.S. and Canada, and then a mere two months after his arrival he enlisted in the Army.  There's nothing in the diary to indicate if that had been his intention from the beginning, but it's a pleasant surprise to see that the enlistment date he wrote is exactly the same as the one Emma gave when she applied for a pension based on his service.

There's also nothing in Jean's diary to explain why he wanted the three reference letters (here are the first and second letters).  They were written in December 1884, which is skipped over in the diary (one of those gaps I mentioned).  It doesn't seem likely that they were for a promotion, unless the promotion took a year and a half to process.  When I get around to ordering his complete service file, maybe it will include something about the reference letters.  With the specific information about units, dates, etc., I shouldn't have much of a problem finding his service records.

But how in the world will I figure out who the Dixon is with whom he went around Canada?
Posted by Janice M. Sellers at 12:02 AM