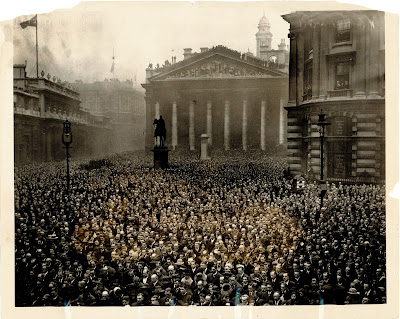 "Thousands of people standing in the heart of The City in London on Armistice Day, 1921.  This was the most impressive scene in England.  The vast crowd is in front of the Royal Exchange.  To the left is the Bank of England.  Most of the men in the crowd are bankers and insurance men."  A few women are scattered throughout the crowd.  This is a "general view of the bare-headed crowd during the two minutes of silence."
Posted by Janice M. Sellers at 2:13 AM