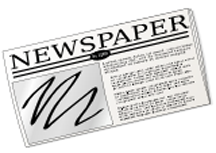 I have been meaning to post another update of what has been added to the Wikipedia newspaper archives page for a while now, but I've been distracted by a lot of other projects.  I didn't realize it had been seven months since I last posted!  I'm trying to catch up, though, so here are some of the most recent additions.  One new country, Lithuania, and new state, Kansas, have been added to the list.  Several of the new archives are being created by one of two companies, Advantage Preservation (which does them with free access) or Newspapers.com (which makes them available for a subscription fee).

• Australia:  Honi Soit, the student newspaper of the University of Sydney (New South Wales), has been digitized for 1929–1990.

• British Columbia, Canada:  The Prince George Public Library has eight newspapers, including the student newspaper for the College of New Caledonia, on its site, ranging from 1909–1965.

• British Columbia, Canada:  Simon Fraser University has a collection of digitized newspapers online, including the student newspaper The Peak and one group called simply "More Newspapers."

• British Columbia, Canada:  The Thompson-Nicola Regional District library is digitizing newspapers from the Kamloops area and has a selection available covering 1882–2014.

• Cuba:  Diario de la Marina is available through the University of Florida's newspaper collection. Years covered range between 1844 and 1961, but coverage is not continuous.

• England:  The Church Times, an Anglican newspaper, has an online archive dating back to its first issue in 1863 and including more than 8,000 issues.

• France:  Two collections of images from Excelsior, a weekly publication that published 20+ photographs in every issue during World War I, are available.

• Italy:  Nine months of the 1885 issues of Il Secolo, published in Milan, are on the Florida State University digital archives site.  The press release I read suggested that more issues will be coming at some point in the future.

• Lithuania:  A new country!  Someone has digitized the Vilna Provincial Gazette and posted it on the Internet Archive.  The years covered are 1838–1917, with a few years missing.  This was published while Lithuania was under the control of the Russian Empire.

• New Zealand:  The Southern Regional News Index covers the Dunedin and Otago area for 1851 to the present.

• United Kingdom:  The Gazette has created an instructional video on how to search and use the online Gazette archives.

• California:  The GLBT Historical Society of Northern California has an online searchable database of obituaries (not just an index) for the Bay Area Reporter, a weekly newspaper covering the GLBT community primarily in the San Francisco Bay area, for the years 1972 to the present.  The Bay Area Reporter itself has an online archive that begins with 2005 and is working on digitizing its issues going back to 1971.

• Connecticut:  The Shelton Library has two collections of newspaper clippings.  The "Library Scrapbook" has clippings from multiple newspapers from 1923–1930 relating to the Plumb Memorial Library.  The "Servicemen's Scrapbook of Shelton Men & Women Serving in World War" has clippings from the Evening Sentinel from 1943–1945, so apparently those servicemen were serving in World War II.

• District of Columbia:  The Capital is online for 1871–1880 and is said to be a great source for research in the Reconstruction period.

• Georgia:  The Macon Daily Telegraph for 1860–1865 is in the American Civil War Newspapers database at Virginia Tech.

• Indiana:  The AIM Media Indiana archive, which has eleven newspapers, is a pay site created via a Newspapers.com partnership.

• Iowa:  Central College in Pella has ten collections of student newspapers and yearbooks covering 1876–2006, but there are some gaps in coverage.

• Iowa:  West Branch newspapers the Local Record and Times, from 1866–1934, are on the West Branch Public Library.

• Kansas:  A new state!  There is an obituary index for Rush County at the Barnard Library site.  It covers 1878–1951.  Copies of the obituaries can be ordered from the library.

• Kentucky:  The Lawrence County Public Library has an online obituary index for the Big Sandy News that covers 1885 to the present.

• Louisiana: The New Orleans Christian Advocate, a Methodist newspaper, is only for 1850–1946.

• Louisiana:  Scanned ads from former slaves looking for family members and friends lost during slavery which were published in the New Orleans Southwestern Christian Advocate (1879–1885) — which does not appear to be related to the previously mentioned paper — are available for free online.

• Maryland:  The Annapolis Capital has been digitized and placed online by NewspaperArchive.com on a pay site.  The collection nominally goes from 1887–2016, but it goes straight from 1887 to 1918–1919 and then to 1929.  It looked continuous from then on.

• Massachusetts:  The Newburyport Public Library has ten digitized newspapers available for free on its site, courtesy of Advantage Preservation.

• Massachusetts:  The (Mattapoisett) Wanderer, which also serves Marion and Rochester in southeastern Massachusetts, has an online archive for its entire publication history, 1992–2016, housed at the Internet Archive.

• Missouri:  The Houston Herald has been digitized and placed online courtesy of Newspapers.com for 1881–present and is a pay site.

• Missouri:  There are online indices for death notices appearing in the St. Louis Globe-Democrat and the Post-Dispatch, along with instructions on how to order copies.

• Montana:  The Montana Newspapers project has some dupblication with the Montana Memory Project but includes many more newspapers.  The years range from 1885 to 2015.

• New Jersey:  The Belmar Historical Society has the Coast Echo and Coast Advertiser for 1881–1974 in PDF and searchable.

• New Jersey:  The New Jersey Hills Media Group has partnered with Newspapers.com to present three newspapers on a pay site.

• New Mexico:  The White Sands Missile Range published its own newspapers, which cover 1950–1990.  There is a list of the issues that are missing, so if you have an old issue, maybe you can help!

• New York:  A new collection of four Staten Island newspapers has been made available, with plans for more to come.

• North Carolina:  The Nubian Message (1992–2005), the black student newspaper of North Carolina State University, has been digitized and placed online.

• Virginia:  The Library of Virginia has the Charlottesville Daily Progress available for 1893–1964.

• Virginia:  The Prince William County Library System has a local newspaper index for 1993–present for three newspapers that have no other index available.

• Virginia:  The Pulaski County Library newspaper archive has five newspapers that range from 1893 to 2015.

• Virginia:  The Handley Regional Library System has an obituary index for the Winchester Star for 1896–1914.  This is a work in progress, and more information is being added to it.

Earlier this year, the National Endowment for the Humanities, one of the funders for the Chronicling America digitization project, announced that the years which can be funded are expanding from 1836–1922 to 1690–1963.  This means that eventually we should see a much broader range of historical newspapers on the Chronicling America site.  You can read the press release here.
Posted by Janice M. Sellers at 1:41 AM