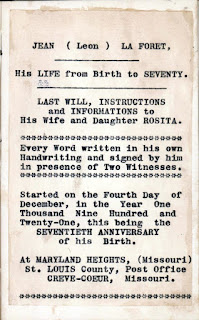 This 3 1/2" x 5 3/8" piece of paper was pasted onto a 3 5/8" x 5 3/4" page in a small notebook.  Both pieces of paper have taken on a little color over the years, but they were probably white when new.  No watermark is visible on either paper.  The text is cleanly and clearly typed.

The piece of paper was pasted onto the second page in the little notebook.  And nothing else about his life story or his will is in the book.  (Not much else is in the book, period.)

I don't know yet if Jean did write a will.  I decided to check right now for his name in the California death index and discovered that he died September 12, 1926 in Solano County.  This early death index does not include the individual's birthplace or mother's maiden name, but it has the age at which someone died.  Even though on the page above Jean indicated he was born in 1851, the informant, probably Emma, "youthened" him by a couple of years, and his age at death was given as 72, when it should have been 74.  I'm sure it's him, though, because the rest of the information matches up:

Jean L. (for Leon) LaForet, spouse's initial E (for Emma), and died in Solano County, where Vallejo is.  Yup, it's gotta be him.  I'll order it eventually, of course, and investigate whether a probate file exists.

But when Jean typed up this small note, he was still living in Missouri, in Maryland Heights to be exact.  That means the date when Jean and Emma moved to California has been pushed back a little more, and that Jean's list of ailments couldn't have been typed before December 4, 1921.

I noted that Jean listed only his daughter Rosita, who was Emma's child.  There's no mention of Adrienne, born in 1874, whom I believe was also his daughter.  Perhaps the "instructions and informations" were only for Emma and Rosita, but Adrienne was in the will.  I also noted that Emma was not named but was simply "His Wife."  Looks like another woman got married and lost her name!

In 1920, when the envelope discussed in last week's post was mailed to Jean, his address was in Overland, Missouri.  In 1921, when he typed this short note, he was in Maryland Heights.  According to Google Maps they're only about five miles apart, so he didn't move far.

I wonder what happened that stopped Jean from writing the will in this notebook, which it appears he planned to do.  I also wonder why he went to the trouble to type up this introduction when he was going to write the will by hand.  Maybe he did write the will but simply never put it in the notebook.  Ah, well, when I get around to seeing if Jean had a probate file, I'll find out if there was a will and if it was handwritten.

Jean also typed "His LIFE from Birth to SEVENTY."  If he intended to write about his life, that might help explain why he kept such an interesting collection of documents.  So far I have seen no evidence of his life story, but I still have more documents to go through!
Posted by Janice M. Sellers at 9:51 PM