Several months ago, I was contacted by someone who said she was my cousin.  Gayle had received a copy of the family tree I had shared with several of the cousins I met when I traveled to Winnipeg, Manitoba in the summer of 2007.  (That visit also happened because a cousin had contacted me out of the blue, but that's a different story.)

Gayle was getting in touch with me because she was organizing a family reunion for November in San Diego and hoped I would be able to come, since I was the family genealogist.  I put the date on my calendar and started looking forward to meeting new cousins.

As the date approached, I realized I hadn't heard from Gayle in a while, so I sent a message to confirm the reunion was still going to happen.  She ruefully told me that most of the relatives who had said they were going to come had since had something come up or had changed their minds, but about half a dozen people were still supposed to be there.  She also said that they were going to be in San Diego for five days.

Eek!  I checked my calendar and discovered that I had managed to fill my schedule for all the days except the one she had originally told me.  I felt horrible, but I asked if anyone would be offended if I flew down in the morning and had to fly back that evening.  She said it wasn't a problem, so I booked my up-and-back flight.  Shopping for the flight wasn't difficult:  Only one airline has the route between Oakland and San Diego.  All I had to worry about was times.  So I stretched out the day as much as I could:  departure at 6:55 a.m., return at 11:25 p.m.  Gayle assured me that the early arrival time wouldn't be a problem for her, because she lives in the Central Time zone and probably would be getting up early anyway.

As the date approached, Gayle warned me that the "reunion" was getting smaller by the day.  More people had had things come up and would not be able to make it.  Would I be disappointed it if were only her and her brother?  This time it was my turn to reassure her.  I am happy to meet any of my cousins, so as long as they would be there, I still wanted to go.  I was especially looking forward to meeting them because they're cousins on the Meckler side of my family, which has been very difficult to research.  Gayle sent me a photo of herself and her brother so I would know who I was looking for.  (Unfortunately, I didn't think to send them one of myself!)

I packed lightly:  family trees, a laptop, and a scanner.  Gayle had told me her brother was going to bring lots of photos, and I was hoping to scan them on site.  When I arrived at the airport, I headed outside to the pick-up area to look for Gayle and/or Paul.  I had been standing out there for about ten minutes when someone walked up behind me and asked, "Are you Janice?"  I turned around, and it was Paul!  Apparently he had just missed me when he went to the waiting area inside.  He had made a sign with my name on it, in classic "meeting someone at the airport you've never seen before" fashion (it even has my flight number and arrival time): 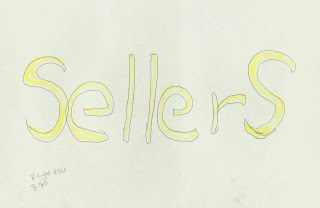 I'm still not sure how Paul figured out who I was, but we went back inside to collect Gayle and began a lovely day of getting acquainted.  Even though San Diego was having a beautiful "chamber of commerce day" without a cloud in the sky, we went to the condo they had rented and talked about family.  I peppered them with dozens of questions about their branch of the family, for which I had minimal information.  Paul brought out their father's scrapbook, which he now owns, and we looked through it from front to back.  Paul was able to identify almost everyone in the photographs.  He also told lots of great stories to go with the photos.

One interesting revelation that came out of our talking about family was that I discovered that Paul and Gayle's branch of the family, my branch, and that of the cousin who wrote to me in 2007 each descend from different siblings of our oldest known ancestor.

We did go out for a lunch break.  We discovered that we all loved Vietnamese food, so we went to a nice little pho (phở) place not far from the condo.  Gayle and Paul had been in San Diego for a couple of days already and had been learning their way around pretty well.  After lunch we found a Trader Joe's to buy the fixings for dinner and then headed back to the condo.  I was all ready to scan — and then discovered that I had forgotten the cable to connect the scanner to the laptop!  Paul was so gracious, he said I could bring the photos and scrapbook back with me and return them after everything had been scanned.  I recently finished doing that, and the package will be heading back to Manitoba soon. (It was a scanning bonanza!  All together it was about 250 photographs, plus several documents, including birth and marriage records.  I consider myself very lucky.)


Later in the afternoon, two more cousins arrived, just in time for all of us to have dinner together before I headed back to Oakland.  I am so glad I took the day to go and meet everyone!
Posted by Janice M. Sellers at 1:04 AM