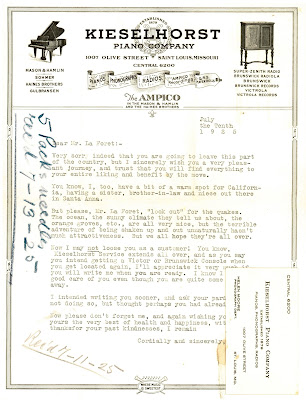 This is a sheet of paper measuring 8 3/8" x 10 7/8", just a little smaller than the modern standard of 8 1/2" x 11".  It's a muted off-white, which may have been its original color.  It has a watermark that says "BOND."  Not only is the Kieselhorst Piano Company's contact and marketing information printed at the top, there's a music-themed frame going around the whole page.  This is an attractive piece of letterhead.  Glued to the lower right corner is a business card for Helen Moore, in the Phonograph Dept. at the Kieselhorst Piano Company.  It was clear that I was going to be unable to detach the card without damaging the letter, so I've left it where it is.  After peeking under the card and looking at the back side of the page, Miss Moore does not appear to have signed the letter but glued the card on in lieu of a signature.  The letter was folded in sixths and came in an envelope: 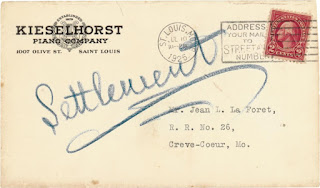 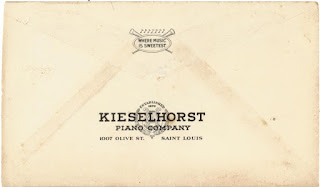 The envelope, 6 1/4" x 3 5/8" and yellowish in color, matches the letterhead, with the same company name, logo, and address.  It is addressed to Mr. Jean L. La Foret at the rural delivery address he included in the short list of facts about himself and Emma that he typed in late 1924.

The letter is dated July 10, 1925 and is addressed to Mr. [Jean] La Foret.  The envelope was postmarked on the same date.  Jean's handwritten note in pencil on the lower left corner of the letter indicates that he received it on July 11.  A second handwritten note on the letter, this one in the middle of the left side, says "5 Packs needles rec'd 7-13-25" in blue.  Another note in blue handwriting appears on the envelope, where "Settlement" and the flourishes underneath it run almost the entire width.

Because Helen Moore's business card covers some of the text of her letter, I have transcribed the final three paragraphs:

Now I may not loose [sic] you as a customer!  You know,
Kieselhorst Service extends all over, and as you say
you intend getting a Victor or Brunswick Console when
you get located again, I'll appreciate it very much if
you will write to me when you are ready.  I know I can take
good care of you even though you are quite some distance
away.

I intended writing you sooner, and ask your pardon for
not doing so, but thought perhaps you had already left.

Now please don't forget me, and again wishing you and
yours the very best of health and happiness, with many
thanksfor [sic] your past kindnesses, I remain

The content of the letter is a little at odds with Jean's handwritten comments.  In a friendly, chatty manner, Miss Moore discusses Jean's impending move to California (which now we know must have been after July 11), her relatives there, the "terrible" earthquakes, and the fact that even in California Kieselhorst will be happy to provide service for him.  But the "Settlement" on the envelope suggests there was a problem that needed to be settled, which might be what the five packs of needles were for, as both of those were written in the same blue.  But if Jean had not yet bought a console, what were the needles for?  Had he perhaps already purchased a record player from Kieselhorst?  Since the company apparently closed its doors in 1930, I somehow doubt I'll find records to resolve this question.

I have to admit, as a native Californian, former journal copy editor at the Seismological Society of America, and someone with a strong personal interest in the study of earthquakes, I am very amused at Miss Moore's comment that "we all hope [the earthquakes are] all over."  My guess is that she was thinking about the 1906 great San Francisco earthquake, which did make news throughout the country.  I'm sure she would have been frightened to learn that the earthquakes kept coming!  I'm also trying to picture exactly how one would "look out" for a quake.
Posted by Janice M. Sellers at 10:52 PM