This is a small newspaper clipping, 3 3/8" x 1 1/2".  No date or newspaper name appears on either side (the back has an ad for a rug sale).  I have not been able to determine when or where this was published.  My guess on when is around 1922–1923, primarily because of the long article about pensions that I wrote about last week.  This piece was pasted into the same notebook, just beneath the long article.

It seems obvious what items on this clipping were of interest to the person who saved it, whom I surmise to be Jean La Forêt, because it was in his notebook.  Penciled semicircles were made to the left of the first and third items.  Both items refer to widow's pensions; the latter specifically discusses Spanish-American War veterans.  So this appears to be related to the topic of last week's article, the pension eligibility of soldiers and sailors who fought in the Spanish-American War, the Philippine Insurrection, and the Boxer Rebellion.  I hypothesized last week that Jean probably fought in the Spanish-American War, based on dates and information from his journal.  This clipping supports that theory.

This is a different perspective on Jean's interest in a pension.  So far I have no evidence that he applied for one himself, but this clipping indicates he had an interest in knowing that Emma would be eligible for one based on his service.  I don't know how pensions worked in this period, so maybe there was a reason for him to put off receiving benefits.  Maybe he felt that the family didn't need the money while he was there.  Or maybe he was just too proud to want to take the money for himself.

Oh, and I finally scanned the cover of the notebook! 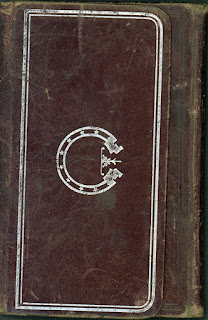