Treasure Chest Thursday: A Short Synopsis of the Beginning of the Schafer Property 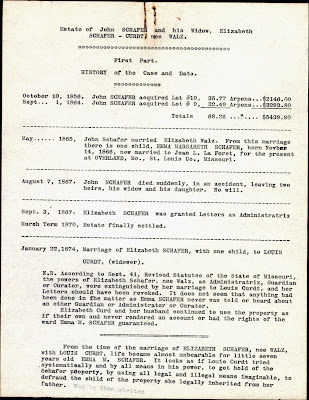 This page was clipped to two others that are carbon copies of it.  Unlike many of the carbons I have looked at while ploughing through the reams of paperwork that Jean La Forêt created (and I'm pretty sure he typed this one also), none of these three pages has been amended in a way to make it different from the others, which is why I decided not to post the other two copies.  They're all exactly the same in content.

As mentioned above, everything is typed on the paper, so no transcription is required.  Only two changes were made to what was originally typed.  First, near the top, in the section that begins "May ...... 1865", at the end of the second line, the word beginning with "Novb" had the letters "er" typed over whatevrer was there to begin with, which is no longer visible.  Second, at the bottom of the page, at the end of the last paragraph, "Was he then abetted" was typed and then erased on all three copies.

Most of the facts presented here have been seen in previous documents from Jean.  The new piece of information is in the last section, which points out that when the widow Elizabeth (Walz) Schafer married Louis Curdt, her powers as administratrix of her late husband's estate and any position she may have had as guardian of the property for her daughter, Emma Margaret Schafer, would have passed to her new husband.  The document also states that Louis and Elizabeth Curdt never reported an accounting of the estate.

Since John Schafer died intestate, the disposition of his property would have relied on the existing laws at the time in Missouri.  While Jean did quote from The Revised Statutes of the State of Missouri, 1899, an important section that did not appear on that sheet was the actual order of distribution of property when there was no will.

On page 739 in the edition of the Statutes which I found previously, Section 2908, "Real and personal estate descends, to whom", states that after debts are paid and the widow receives her dower, the estate goes "[f]irst, to his children."  That would have made Emma the sole heir after her mother had received her share as widow.  As Emma was a minor when her father died, a guardian would have been appointed to oversee the property that was to come to Emma when she reached adulthood.

I find it significant that nowhere in all the papers I received when I was talked into taking this on is there a copy of any documents having to do with John Schafer's estate:  no appointment of administratrix, no inventory, no list of debts, no distribution, no guardian report, no nothin'.  Considering how diligent Jean appears to have been with other aspects of documentation and saving paper, that's rather surprising.  Perhaps he did acquire a copy, which is what led him to say that the the Curdts never "rendered an account."  So now I have to wonder if those documents were among the others and were removed by an unknown person at some point in the past.

After I've gone through the remaining papers in my little treasure chest (there's still quite a pile left), obtaining a copy of John Schafer's probate file may have just moved to the top of my to-do list.
Posted by Janice M. Sellers at 9:04 PM