Treasure Chest Thursday: It's a Conspiracy! 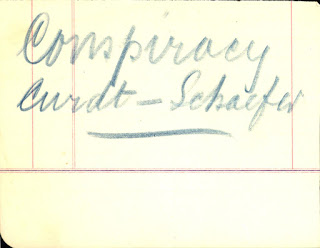 There wasn't a Treasure Chest Thursday post last week, partly because I was at the IAJGS International Conference on Jewish Genealogy, and partly because the large flatbed scanner I have been using was out of commission.  When I returned from Florida, however, I discovered that the scanner had been repaired, so I started scanning the oversize pages regarding the property/inheritance dispute between Emma (Schafer) La Forêt and her Curdt siblings.

While I was scanning, this little scrap of paper jumped out, begging for attention.  I have to admit, I laughed when I first saw it, but I thought it was a fine way to get back into the spirit of Jean's feelings regarding the entire situation with the Curdts.

The paper is 5" x 3 13/16".  It's a grayish off-white with lines lightly printed in blue (I think), columns in red, and a border in red and blue.  It was neatly torn off of a larger piece of paper.  It looks as though it might have come from an accounting ledger or something similar.

The only words on it are "Conspiracy / Curdt — Schaefer", in what appears to be Jean La Forêt's handwriting.  We have seen the word "conspiracy" used previously in the documents connected to this story.  In fact, it was at the very beginning of my posts, in the typed history of Emma Schafer:

"From this time on, there existed a Conspiracy to defraud and despoil EMMA M. SCHAFER of her property."

"Thus Elizabeth Curdt disclosed her partnership in the CONSPIRACY, and stuck to her criminal husband against her first child."

So it's very clear what Jean thought of the goings-on.  Maybe this little note was the first time he had put it in writing.
Posted by Janice M. Sellers at 8:43 PM