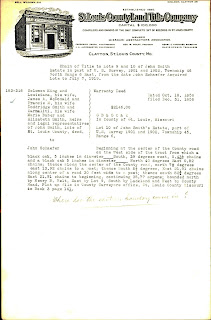 This sheet, and each of the three that follows, measures 8 1/2" x 14", the standard for legal size.  This first sheet is slightly yellowed but appears to have originally been a creamy off-white.  It's a heavy bond, possibly more than 20#, with a very sturdy feel.  It has a watermark that is difficult to read, but I can make out "Byron / –eston Co / —n Recor— / 1918."  I think the first two lines might be "Byron Weston Company", but I'm stuck on the next word.

This is a sheet of letterhead for the St. Louis County Land Title Company.  Everything is typed on the page except for a check mark in pencil on the left and one sentence in pencil at the bottom:  "Where does the eastern boundary come in?" 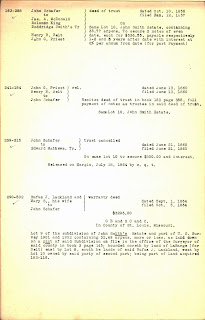 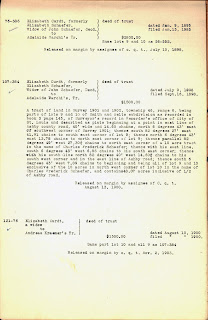 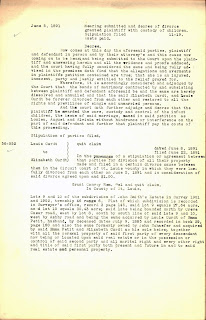 These three pages are of a lesser stock than the first.  They're all a muted yellow-orange with stronger color at the top.  Everything on each is typed except for a penciled check mark to the left of each transaction.

The first page tells us that the set of documents is a chain of title to lots 9 and 10, which are the land at the center of the dispute between Jean and Emma La Forêt and Emma's three Curdt siblings.  The receipt posted last week says that the order was for lots 9 to 16; we'll have to wait until we go through all the pages to see which is correct.

It's clear that Jean copied the information from these entries to create his abbreviated version, which did not include all the details for every transaction.  But he wasn't perfect with his copying — the first mistake comes in the first entry, with the name Solomon, which Jean typed as Salomon.

From these four pages, Jean copied the first entry in its entirety.  On the second page, he took highlights of the first three listings and then copied the fourth completely.  He seems to have copied everything from the third and fourth pages.

One question this resolves is why the land was referred to as a subdivision of John Smith's estate in the legal waiver that Louis Curdt signed.  John Smith's heirs sold lot 10 to John Schafer.  Apparently Mr. Smith wanted to make sure his children's names stood out a little more than his:  Louisiana Smith and Doddridge Smith are decidedly less common.

John Schafer purchased lot 10 directly from Smith's heirs in 1856, but he didn't acquire lot 9 until 1864, almost ten years later.  He purchased that land from Rufus and Mary Lackland, who do not appear to have been Smith's heirs.  Since the chain of title was concerned with the properties from the time that Schafer had them, we don't get information on when the Lacklands bought lot 9, but the description mentions 182-116 and that it was part of Smith's estate.  Schafer's purchase of lot 10 was 183-316, so it was probably not long after the Lacklands bought lot 9.

Comparing the descriptions of the two pieces of land, one finds a lot more detail in that for lot 10, which uses landmarks ("a black oak, 5 inches in diameter"), degrees of direction, chain measurements, and roads to define the plot.  The description of lot 9, on the other hand, is distinctly less precise — "32.49 arpens, more or less" — refers to a file in the surveyor's office instead of giving details, and has spelling errors ("noreth" for north, "be" for by).  Maybe the two transactions were processed by different clerks.

I can see some logic to Elizabeth's letters of administration being listed here, as her appointment meant that she was in control of the land, but I'm surprised that information about the family's marriages and divorces appears in the chain of title.  I don't think they're normally registered at the same county office as land transactions.  When I looked at Jean's compilation, I figured he had obtained documents from multiple sources.  But the chain of title refers to the marriage records; why?

Here's another confusing thing about these documents:  Why are some letters and numbers underlined?  On the first page, we see "0.43 1/2" and "page 141".  On the second page, there are "Smith's" and "plat".  The third page has "Miss" Elizabeth Schafer, but that might have been underlined to emphasize the error, as a widow should be Mrs.  But why does the last entry have "Schafer" twice and "Kink"?  Happily, the fourth page has no strange underlines.

It appears that the check marks on these pages might simply have indicated that Jean had copied what he wanted from the entries, since he checked every one.  I don't know why someone wrote the question on the first page, though.  The description of lot 10 says it is bounded on the east by lot 9.  (That information is confirmed in the description of lot 9, which says it is bounded on the west by lot 10.)  So if the eastern boundary is defined, why would someone ask where it comes in?
Posted by Janice M. Sellers at 12:00 AM