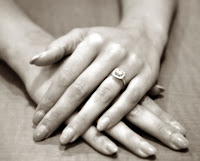 Today, March 6, was the birthday of my maternal grandmother, born Esther Lillian Gordon in 1919.  She was never called Esther; she and her three 1st cousins who had the same given names (all were named after their deceased grandmother, Esther Leah Schneiderman Gorodetsky) were called Lily.  Even so, she didn't like the Esther and later changed her name, possibly legally (she told me she had), to Lillyan E.  I don't know if she changed it before or after she married my grandfather in 1939, or where the change took place.

One of the things I found most interesting about Bubbie (Yiddish for "grandmother") was that she was left-handed.  During the period in which she grew up, it was common for teachers to try to force left-handers to write with their right hands, due to historic societal and cultural perceptions against left-handedness.  It took many years, but it finally dawned on me to wonder how my grandmother had escaped that pervasive social pressure.

I'm lucky in that my light-bulb moment came while Bubbie was still alive, so I asked her about it.  She told me that the teachers in her elementary school had indeed tried to force her to use her right hand for writing and other tasks.  Apparently she mentioned this to her mother, who she said then angrily walked down to the school and informed those teachers that her daughter was left-handed and that was the way she was going to stay!

Sometimes my mind works slowly to assimilate all the pieces of information with which it is presented.  While I appreciated my great-grandmother's desire to stand up for her daughter, it took a while longer for me to realize that another story I had been told about my great-grandmother was that she never learned to speak English, even though she arrived in the United States in 1905, became a naturalized American citizen in 1945, and lived until 1963.  My mother used to tell me that she communicated with her grandmother by speaking English and her grandmother responded in German, and the two managed to make themselves understood somehow.  So if she never learned English, how did she convey to little Lily's teachers that they should no longer try to force Lily to use her right hand?  Unfortunately, that question did not coalesce in my brain until after my grandmother had passed away, so I will probably never know the answer.
Posted by Janice M. Sellers at 6:21 PM