The second half of this year's RootsTech was just as much fun as the first half, and I continued to find opportunities to learn.  On Friday I was having trouble deciding which session to attend, and I finally went to Myko Clelland's talk on the "hidden" British and Irish gems on the FindMyPast site.  Great choice!  I particularly enjoyed learning about the older parish records available on the site, especially the marriage record of a deaf man in 1576, because it included a description of how the man communicated during the ceremony.  I didn't catch the groom's name, so I've sent Myko a message asking that, as I want to read the record myself (I've taken American Sign Language classes for many years and am always on the lookout for historical mentions of deaf individuals and communities to share with my teacher).  Hey, if anyone reading this happens to remember the groom's name in that record, please let me know!

During the lunch break on Friday I participated in a focus group for MyHeritage.  I can be very opinionated (which I'm sure will surprise everyone who reads my blog), so that was a lot of fun.  I was even asked to stay a few minutes after the others had left to give some additional insights.  I hope some of my suggestions turn out to be useful.

The big MyHeritage party was Friday evening, which was a blast, as usual.  I remember seeing Thomas MacEntee, Lisa Hork Gorrell, Jacqueline Henderson, Banai Feldstein, Debra Robinson, Michelle Goodrum, Leslie Lawson, Jamie Mayhew, Sheri Fenley, Dan Earl, Randy Seaver, and Robert and Alice Burch, and as usual I know I've forgotten people (I must be getting old).  Along with several tasty food offerings (was that actually a pork sausage served on the antipasti tray?) and yummy mocktails (I particularly liked the frozen mango lemonade), there was a hat-decorating station and a video set-up.  I, of course, wore the hat I decorated for the video.  (I learned that only Banai Feldstein and I took the time to sew the decorations on our hats; everyone else used glue.  I guess we wanted our hats to last longer than the party.) 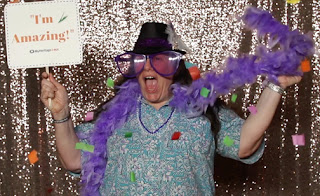 Saturday morning started with a MyHeritage Friends breakfast, where attendees were asked to give our thoughts about the company's current and future directions.  MyHeritage really seemed to be trying to find out what its users think of its offerings.  Some of us started talking about a possible conference in New Orleans in October 2020.  Would you go?

I am very happy I went to Dan Earl's class on "Funeral Homes and Family History", which he had listed as being suitable for beginners but which covered a lot of interesting material about the history of funerals and of the funeral home industry.  He has an uncommon perspective on the subject, his father having owned a funeral home.  I learned some new stuff, which is always a good thing.

My session, on copyright and its impact on genealogists, was in the very last time slot on Saturday.  I had been joking that only half a dozen were going to show up, but I was happy to see about 30 people in the room, including artist and author Kathy Marshall, whom I know from the African American Genealogical Society of Northern California.  She even had a real-life copyright question she asked me and then allowed me to use as an example during my talk.  Many people asked good questions, and it was clear they were thinking seriously about how copyright issues could affect their work.

After that it was back home to Portland and my boyfriend, cats, and birds.  I'm glad I had the opportunity to go to RootsTech this year, and I hope I'll be back next year.
Posted by Janice M. Sellers at 12:27 AM