Well, here I am again at RootsTech!  How could a year have gone by so quickly?  My presentation isn't until the last day of the conference, in the very last time slot, which is giving me a lot of time to do my own research, go to other people's talks, and generally goof off and enjoy myself.

I like having a full day of sessions on Wednesday.  I went to presentations on German records, American Civil War records, and slavery records, but the standout was the talk by Brian Donovan (of FindMyPast) on "security" records that can be used in Irish research.  Security in this instance is essentially a euphemism for police, and he explained a lot about how effectively the English policed the Irish between 1836 and 1922, including the impressive (and frightening) amount of time during which habeas corpus was suspended in the country.  The positive aspect of that is that the English created many, many records relating to their mission to keep Ireland "secure."  I have several new directions in which to look for my research on the families of my half-sister, my boyfriend (whose family members were said to have been involved in various Republican activities), and another friend.

The other event I attended on Wednesday was the African American Welcome Reception, hosted by the Utah chapter of the Afro-American Historical and Genealogical Society and the LDS Genesis Group.  I was very happy to renew my acquaintance with Robert and Alice Burch of the AAHGS chapter; Robert actually recognized me from last year!  We also had Gene Stephenson, president of the AAHGS national organization, in attendance, along with Utah State Representative Sandra Hollins.  It was a wonderful social event, and even Representative Hollins is interested in her family history.

Thursday's education included two impressive talks.  Tony Burroughs, the preeminent researcher in the country for black genealogy, discussed "Platting Plantations", which included important material about identifying an ancestor's slave owner, that owner's property and whether it was a plantation, and tools to plat and map the property.  I'm always happy to learn more from Mr. Burroughs.

The other great talk was about World War II research and was given by Jennifer Holik.  It was immediately apparent that she is passionate about the subject.  She recommended many record sources to learn more complete information about your relative's military service during the war and ways to honor that service.

I have to admit that I blew off one session that I had planned to attend because I ran into my good genealogy friend Nicka Smith, whom I have barely seen since she moved from California to Tennessee.  Not only did I get to hear about her current research, which is really interesting, but as we walked around the exhibitor hall we ran into True Lewis, whom I have now finally(!) met in person. 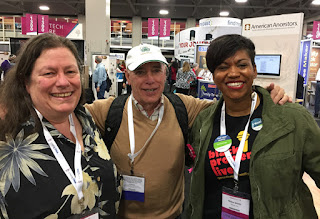