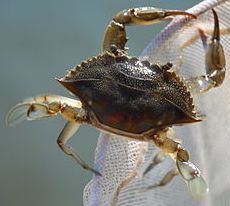 So far I've posted twice for National Go Fishing Day, both times with stories about fishing with my father.  I didn't really fish with him for shellfish, though.  He might have been the one to teach us three kids (my brother, my sister, and me) the basics, but it might have been one of our neighbors in Villa Tasso, the tiny unincorporated settlement where we used to live.  They probably had more experience with this type of fishing.

We were within really easy walking distance of the beach at the bayou (which was an arm of Choctawhatchee Bay), so it didn't take long to get to the water.  The shellfish readily available to us were crabs, shrimp, clams, and oysters.

Crabs used to hang out on the supports of the small dock.  Those we caught with long-handled nets, scooping them up from underneath.  They likely were blue crabs, like that guy above.

We used handheld nets to go seining for shrimp.  There would be two of us, each holding one end of the net, and we walked slowly through the water and netted the shrimp.  The shrimp weren't very big, but we caught a fair number of them this way.

I can't remember what we stored the crabs and shrimp in.  It was probably a cooler or something similar.

Clams and oysters we found by walking through the heavy wet sand beneath the water but near the edge of the beach.  We pushed down with our toes and felt for shells, then reached down and pulled them out, loading them into buckets.

After we had caught what we thought was enough, or gotten tired or bored enough, we would bring everything back to the house and announce to our mother that we had caught dinner.  At that point we left it to her to clean everything.  We just delivered it.  I guess that was kind of lame of us, but I don't remember her complaining.  I think she was happier with cleaning than with going down to the beach to catch it all!

There are many things I don't miss about Florida — 95/95 weather, entrenched mindsets about non-WASPs and about a woman's proper place in the world — but I definitely miss being able to catch our own shellfish for free and eat it the same day.