Today for Saturday Night Genealogy Fun, Randy Seaver has us writing up information about one of our ancestors.

Here is your assignment, if you choose to play along (cue the Mission: Impossible! music): (1) Pick a great-grandparent of yours—any one of your eight.  Tell us three (or more) things about him or her.

I decided to write about my great-grandmother Minnie Zelda (Nowicki) Meckler (c. 1880–1936).  She was my mother's father's mother.  Like Randy, I'm writing more than three things.

Minnie's original name was Mushe; I don't know if she had a middle name at first.  I don't have documentation of her birth, so 1880 is an estimate based on later records stating her age.  She was probably born in Porozowo, Russian Empire, now Porazava, Belarus.

Mushe Nowicki married Moishe Meckler about 1900, again an estimate.  They might have married in Porozowo or somewhere nearby; it was almost definitely in Grodno Gubernia.

Moishe immigrated to the United States in 1906; Mushe came later with the three children.  They departed from Antwerp, Belgium on October 14, 1911 and arrived at Ellis Island on October 23 on the Vaderland.  At some point after arrival everyone Americanized their names and they became Morris (sometimes Max), Minnie, Sarah, Sam, and Harry.  To make their family name sound less Jewish, Morris and Sam modified it to Mackler; Harry used Meeckler.

Minnie died August 4, 1936 (her yahrzeit is 17 Av) in Brooklyn of a cerebral hemorrhage.  She was buried in Mt. Zion Cemetery in Queens on August 5.

As far as I can tell, Minnie did not become an American citizen.  My great-grandfather Morris naturalized in 1942.

The 1911 passenger list indicates that Minnie was 5'1" tall and had a fair complexion, dark hair, and brown eyes.  I have one photo of her, taken with the three children born in Russia.  Judging by the ages of the children, it was likely taken shortly before Moishe's departure in 1906. 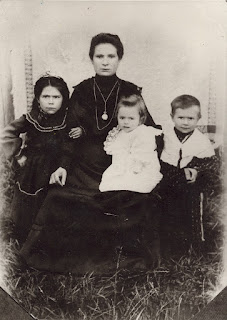