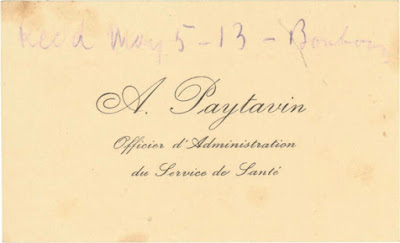 Last week I had an envelope from the Paytavins with nothing inside.  This week I have cards from the Paytavins with no envelope.  The card at the top, that of Mr. A. Paytavin, is 3 7/8" x 2 3/8" and is on heavy buff cardstock.  It is another copy of the same business card (Administrative Officer, Health Service) as the one on which Mr. Paytavin wrote when he announced the birth of his son.  On this card, in what appears to be Jean La Forêt's handwriting, is a note in pencil:  "Rec'd May 5 – 13 – Bonbon [?]". 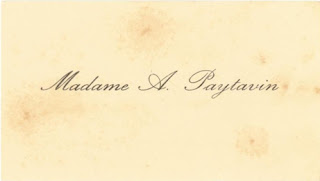 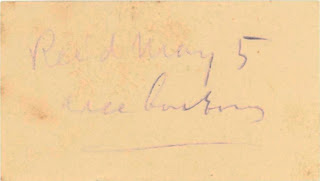 This smaller card is printed on the same heavy buff cardstock as that of Mr. Paytavin, but it is a calling card for Madame (Mrs.) Paytavin.  It is only 3 1/6" x 1 3/4" in size.  The front of the card has her name, while the back has, in pencil, "Rec'd May 5" and something I simply cannot read.

So it appears that on May 5, 1913, Jean received these two cards.  I presume they were probably sent by mail, but this time he didn't save the envelope, or at least it did not survive for me to see it.  As I cannot read the word after the date on either card, I don't know if they would help explain why these were sent.

This was the business card Paytavin mailed December 17, 1912 when he was in Constantine at the (probably military) hospital.  The next communication I have from Paytavin is the envelope mailed January 10, 1913 from France.  I was thinking that maybe he was no longer in the same position, but these cards were received May 5, 1913.  Maybe the Paytavins were on vacation in France over the Christmas holidays and returned to Algeria afterward?

These cards don't tell me much about Jean, other than confirming that he liked to save things.  Maybe someone else can read the problem words, which might shed more light on this mystery.
Posted by Janice M. Sellers at 11:49 PM