You never know what someone will think is important enough to save.  This envelope is 9 3/4" x 4 1/8".  The paper is now yellowed, although it was likely white originally.  It has an interesting texture but no watermark.  In the upper left is printed "American Consular Service."  Handwritten in blue across the front of the envelope, in what appears to be Jean La Forêt's writing, is "Forms — Personal Services as Vice-Consul and others."  The envelope had been sealed but was opened before I received it.  Inside the envelope were two forms. 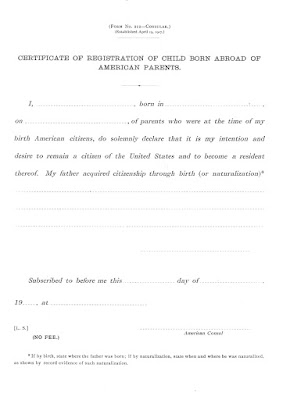 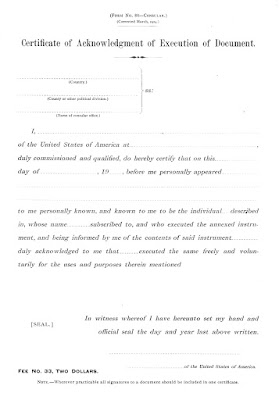 The first form, #212, "Certificate of Registration of Child Born Abroad of American Parents", has "Established April 19, 1907" at the top.  The second form, #88, "Certificate of Acknowledgment of Execution of Document", has "Corrected March, 1914."  Each sheet is off-white (probably having taken on color over time) and 8" x 10 1/2".  Both forms are preprinted and easy to read.

Form #212 does not register the birth of a child born abroad of American parents, but rather registers that child's intention to remain a citizen of the United States.  Would Jean and Emma La Forêt's daughter, Rosita, have had to fill out one of these?  Based on the information we have seen so far, Rosita was born September 4, 1909 in Switzerland and moved to the United States in 1917, when she and her mother traveled on an emergency passport during World War I.  So she was 8 years old when that happened.  The one example I found online of a reference to this document having been filed (transcription only, unfortunately) was for a 24-year-old man.  Since the form appears to require the foreign-born individual to sign, it probably was intended for an adult.

The only other reference to this document found through a Google search was in the Digest of Circular Instructions to Consular Officers, January 1, 1897 to May 25, 1908, compiled by Augustus E. Ingram, an American Consular Assistant (the book is downloadable from Google Books).  I was amused to see that the book says the form was established April 19, 1906, not 1907.  No description or other information about the form is included.

A search for the second form garnered more results, thirteen in total.  The form seems to function the same as a notarized statement accompanying a document, and in fact the form and its use are described in A Notarial Manual for Consular Officers (1921) by C. E. Gauss (also downloadable from Google Books).  So I guess consular officers could fulfill the duties of a notary.  In addition to that reference, I found two scanned examples of completed forms.  The first (click the image in the upper left), dated April 13, 1910 and completed in Turkey, has "Corrected February, 1908" at the top.  (I used to collect stamps, and I love the $2 consular stamp on the bottom of the form.)  The second, dated February 25, 1936 and filed in the United Kingdom, is the same form that Jean kept a blank copy of, with the March 1914 notation.  I didn't notice any differences between the two forms; maybe someone else will.

None of this, however, points to any reason Jean would have bothered to keep these blank forms.  Maybe they were simply packed with other papers when he left Algeria and no one ever bothered to throw them out.  That doesn't explain the note on the envelope, however.  Yet another mystery about M. La Forêt!
Posted by Janice M. Sellers at 11:15 PM