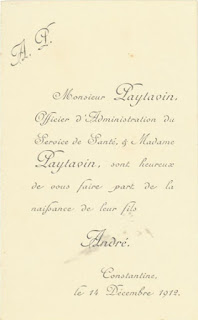 There hasn't been that much in the documents saved by Jean La Forêt regarding his social life.  This item gives a small amount of insight.  The folded piece of buff paper, 2 3/8" x 3 13/16" as folded (no watermark) is a birth announcement. 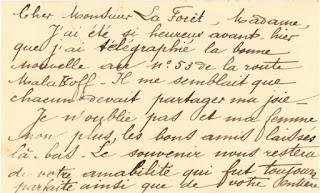 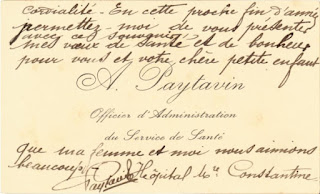 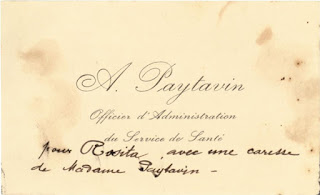 These two business cards, each 3 13/16" x 2 3/8" on heavy buff cardstock, were in the envelope (below) with the birth announcement.  I don't know if they originally came with the announcement, but it's how I received them, and they make sense in context. 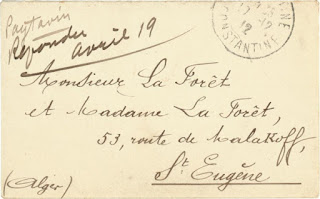 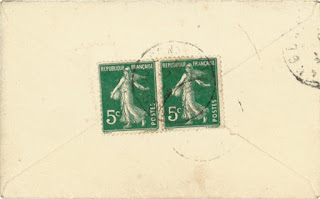 And this is the envelope in which the birth announcement and business cards were stored.  It is 4" x 2 1/2" and the same buff color as the other items.  The postmark date on it appears to be December 17, 1912.  On the observe, it was mailed with two 5 centime stamps.

First will come the transcriptions of the items, and then the translations.

Mr. Paytavin, Administrative Officer, Health Service, and Mrs. Paytavin are pleased to announce the birth of their son
André

I was so happy before yesterday that I wired the good news to 53 Malakoff Road.  It seemed to me that everyone should share my joy.  Neither I nor my wife has forgotten our good friends left behind.  The memory will remain with us of your kindness, which was always faultless, as well as your complete hospitality.  As we approach the end of the year, allow me to share with you this token, my best wishes for your health and happiness for you and your dear child, whom I and my wife love very much.

For Rosita, with a hug from Mrs. Paytavin

This is another item about someone with whom Jean was apparently friends, but nothing about Mr. Paytavin was in Jean's journal.  I find this surprising, since Paytavin took the time to include a card with a note specifically for Rosita.

In 1912 the La Forêt family lived in Saint-Eugène, the same Algiers neighborhood as did Ortety, the man who wrote a letter about Germany signing the peace agreement after World War I.  The Paytavins lived in Constantine, almost 250 miles away.  Based on Paytavin's comment about his friends left behind, he might have lived in Algiers prior to Constantine.

Even though Paytavin appears to have worked for the French government, in several Google searches I could find absolutely nothing that I was sure was about him.  Often government functionaries appear online in scanned published reports.  Maybe he was only a low-level guy.  On the other hand, I found several items that referred to a school named for André Paytavin, but I couldn't determine for what person the school was named.

Paytavin appears to be an uncommon name.  Has anyone heard of it before?  I'm curious about its origins.

If I am correct that "Mre" is an abbreviation for "Militaire" ("military"), this might be the hospital to which Mr. Paytavin was assigned.
Posted by Janice M. Sellers at 8:44 PM