Treasure Chest Thursday: Another Letter from a Paytavin for the La Forêts 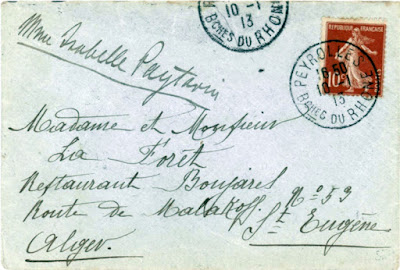 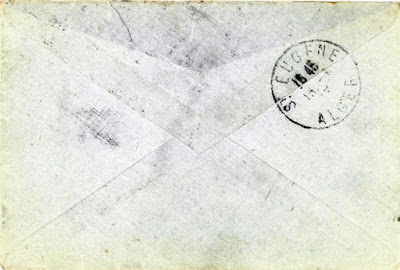 Well, not actually a letter, but an envelope.  This envelope is 4 3/4" x 3 3/16".  It is light blue and lightweight, the type of paper commonly used for airmail, when that cost more than regular mail.  It did not come with anything in it, and none of the loose papers match the date on the postmark of January 10, 1913.  The postmark indicates the letter was sent from Peyrolles (en Provence), Bouches du Rhône, France.  The stamp is 10 centimes.  The back of the envelope has a postmark for St. Eugène, Algeria dated January 13, so it took the letter three days to travel from France to Algeria.

The envelope is addressed to:

Beginning in the upper left corner and written diagonally down is:

Isabelle Paytavin's name appears to have been written by Jean, in the same way he made notations on other letters and envelopes he received.  At least now we know her first name, which did not appear in any of the items announcing her son's birth.

I am no handwriting expert, but the handwriting for this address seems to be different from that of the envelope I wrote about last week.  My guess is that last week's was written by Mr. Paytavin and this week's by Mrs. Paytavin, because of the name "Isabelle Paytavin" written on this envelope.

The address for the La Forêts, 53 route de Malakoff, is the same as on last week's envelope, but this time we have the addition of "Restaurant Boujarel."  Does that mean the La Forêts were living above a restaurant?  (I'm going to assume they weren't living in one.)  That doesn't seem logical for a U.S. Vice Consul.  Searching for "malakoff", "boujarel", and "alger" hasn't gotten me anywhere, so I don't know anything about the restaurant yet.  There is a Baedeker's Guide for the Mediterranean for 1911 that apparently covers Algeria; maybe it has a listing for the restaurant.

The letter from last week was postmarked December 17 (probably), 1912 in Constantine, Algeria.  During the intervening month the Paytavins, or at least Mrs. Paytavin, appear to have moved to Peyrolles (which is pronounced very similarly to "payroll").

I just wish I knew what Mrs. Paytavin wrote to the La Forêts.
Posted by Janice M. Sellers at 11:58 PM