I'm here in Arlington, Virginia for the third International Black Genealogy Summit (IBGS).  I was privileged to have a presentation accepted for the conference (one of only 32!), and lucky that I was able to come.

The conference opened Thursday night with registration and an evening reception.  I've been told that the total number of attendees is about 400, and I think most of us were there last night.  It was a great opportunity to meet a lot of new people and talk about genealogy while enjoying a lovely buffet of steak sliders, crab cakes, barbecued pork, lots of fresh vegetables and fruit, and even a chocolate fountain.

Today (Friday) started with a continental breakfast buffet and a special opening session.  Conference chair Algurie Wilson introduced Mr. Daouda Diabaté, the Côte d'Ivoire ambassador to the United States, who had contacted the conference about participating.  Not many genealogy conferences have an ambassador in attendance!  After he spoke, Hari Jones talked about the African American Civil War Museum and Freedom Foundation.  From there we went on to the conference classes.

My talk on historical black newspapers was in the very first time slot (did someone tell them how much I hate mornings?).  I thought I would have about 50 or so people; it was more like 100.  We almost overflowed the room.  I'm happy to report that everything went well and everyone enjoyed the class.

Then I was able to go to sessions and learn new stuff.  Angela Walton-Raji had an interesting talk about black women in the Civil War who were nurses and matrons.  The genesis of her talk was finding a record group (94) at the National Archives titled "Carded Service Records of Hospital Attendants, Matrons and Nurses 1861–1865", which come under Records of the Adjutant General's Office.  Angela found a roster of "colored contract nurses" and fell into the research "rabbit hole."  It is always amazing to learn how many fascinating records are out there. 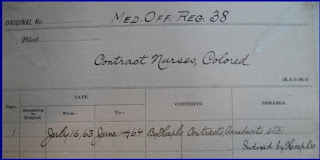 In her session on World War I military records Elyse Hill talked about some record sets I have not had occasion to use:  "Gold Star Mothers Pilgrimages", "Records of the Judge Advocate General (Army), 1792–2010", and "Georgia World War I Service Cards."  Even more interesting records!  Elyse also stated that when the Army draft began, noncitizens had to register but were not subject to induction, something I have not heard before, and I had plenty of relatives who were not citizens during the draft period.  I'm going to try to learn more about that claim to verify its accuracy.

The last talk I heard today was by Bob O'Connor, who has been researching U.S. Colored Troops for about ten years.  He has collected massive amounts of detailed information and has published several books on specific topics related to the USCT.  Along with relating many statistics about the USCT during the Civil War (such as the facts that 105 black prisoners were among the 40,000 Union men held at Andersonville Prison and 84% of them survived), at one point O'Connor was discussing a book of fiction he wrote.  A historical person that inspired one of the characters in the book was Charles Washington, whom he said was a "direct descendant of George Washington."  Since George Washington had no children and therefore no direct descendants, I hope that was simply a misstatement by O'Connor and that it does not reflect on the quality of his research.

I am looking forward to more fun tomorrow:  black pilots and spies during the Civil War; Southern Claims Commission records; USCT pension applications; and records of the Panama Canal.  In addition, the day will end with a banquet and a presentation by Regina Mason.  I have heard her speak before, when she visited the African American Genealogical Society of Northern California.  Yup, another good day for genealogy!
Posted by Janice M. Sellers at 7:27 PM