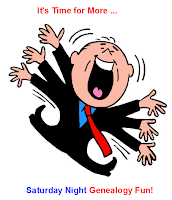 Randy Seaver has found another very . . . interesting challenge for Saturday Night Genealogy Fun.  I'm not really sure what I think of this one and the outcome.

Your mission this week, should you decide to accept it, is to:

(1) Find something that you have written that you are really proud of - the best of your work. Do an Edit > Copy of it.

(2) Go to the web site http://iwl.me/ and Paste your text into the waiting box.

I'm not sure what I expected as results, but it wasn't this.  I chose two posts that I'm fairly happy with:

and I got the same result for both:

Sir Arthur Charles Clarke, CBE, FRAS, Sri Lankabhimanya (16 December 1917–19 March 2008), was a British science fiction author, inventor, and futurist, famous for his short stories and novels, among them 2001: A Space Odyssey (1968), and as a host and commentator in the British television series Mysterious World. For many years, Robert A. Heinlein, Isaac Asimov, and Clarke were known as the "Big Three" of science fiction.

Clarke served in the Royal Air Force as a radar instructor and technician from 1941–1946.  He proposed a satellite communication system in 1945 which won him the Franklin Institute Stuart Ballantine Gold Medal in 1963.  He was the chairman of the British Interplanetary Society from 1947–1950 and again in 1953.

Clarke immigrated to Sri Lanka in 1956, largely to pursue his interest in scuba diving; that year, he discovered the underwater ruins of the ancient Koneswaram temple in Trincomalee.  He lived in Sri Lanka until his death.  He was knighted by Queen Elizabeth II in 1998 and was awarded Sri Lanka's highest civil honour, Sri Lankabhimanya, in 2005.

I could certainly have done worse!  Although I don't think I'll be coming out with the next great riff on 2001 anytime soon.

I read the "About" page on the site and found that it works with a list of 50 authors.  It doesn't appear to be random chance that got me the same result, but who knows for sure?
Posted by Janice M. Sellers at 7:07 PM