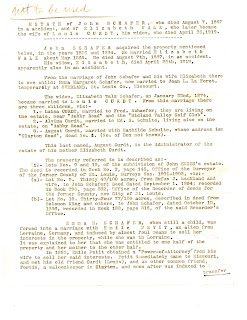 This piece of paper is 8" x 9 7/8", a size we've seen previously.  It is off-white and has visible lines in both directions but no watermark.  It was folded in thirds, though the fold lines did not carry through to the scanned image. 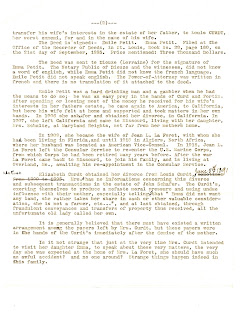 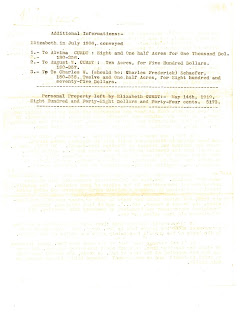 This is the second page and the reverse of that page.  The sheet of paper is the same size as the first page and is of the same paper stock.  The two pages are attached by some sort of glue or paste in the upper left corner.  Both pages are typed, and they appear to be originals.  There is texture to the text on both sides of the page. 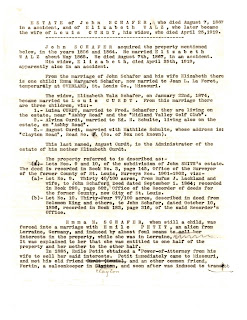 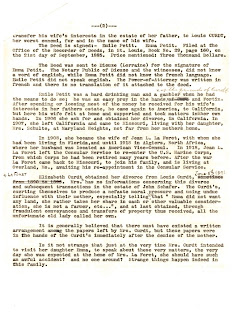 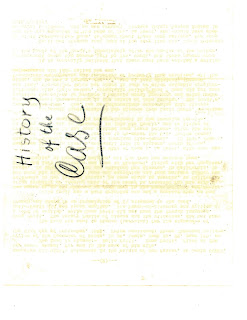 The first two pages here appear to be carbon copies of the the first two original pages shown above.  They feel as though they have gone through a typewriter, but the impressions are not quite as deep, and the ink seems to be that of carbon paper.  The paper stock is the same as the originals.  Instead of a copy of the third page, however, the reverse of the second page has "History of the Case" written in blue pencil.  I don't know whose handwriting this is.  These two pages are attached in the same way as the originals, with paste or glue in the upper left corner.

This envelope is 9 1/2" by 4 1/8".  It's made of a fairly heavy stock and is a medium tan in color (notwithstanding the orange look in the scan).  The writing is in blue pencil and looks like that of Jean La Forêt to me.  The pages above were in this envelope when I received them.

Looking at the two sets of papers, it is clear that the second set is a carbon copy of the first, because everything matches almost exactly as far as the typing is concerned.  The carbon copy has some corrections in pencil and pen, where words have been struck out and some additions made.  Both the original and the carbon have the word "transfer" typed in the lower right corner.  On the original, it appears that someone tried to type it and it didn't fit, so apparently the decision was made to type it separately on each page later.

I believe the person who put this information together was Jean La Forêt.  He was the person who often typed up and collated information.  The word "ennemi", which means enemy (second line of the second page) pretty much convinces me this is Jean's work.  "Informations" (second page, sixth paaragraph, second line, and third page, first line) seals it for me.  These are both French words.  So is "nefaste", which I have finally learned means harmful (second page, sixth paragraph, fourth line).

As for the content — now we're getting into some interesting material.  This is the first I remember reading that John Schafer's death was an accident, and definitely the first time I've seen it compared to Emma's mother's accidental death.  That puts a new spin on John Schafer's death, which until this document had not been cast as suspicious.

The document brings into one narrative several pieces of information we've read about previously:

• the marriage of John Schafer and Elizabeth Walz (which no one seems to have a copy of), which produced one child, Emma Schafer

• John Schafer's purchase of lots 9 and 10 in St. Louis County

• the amount of property conveyed by Elizabeth to her Curdt children

• the timing of Elizabeth's death, on the day she was going to talk to Emma about family matters

It's nice to see how much of that I have supporting documentation for!  These pages also add quite a bit more to the story, however:

• details about John Schafer's purchase of lots 9 and 10, including the apparent explanation of the name John Smith, enough such that I should be able to obtain copies

• details about the sale of Emma's interest in her father's estate, again enough so that I should be able to order copies

• the language problems that accompanied the accomplishment of that sale

This really is becoming a lurid soap opera, isn't it?  I particularly like the line "Strange things happen indeed in this family."

But oh!, I have so many more documents now that I'll need to order!
Posted by Janice M. Sellers at 10:31 PM