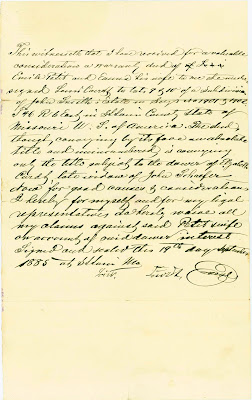 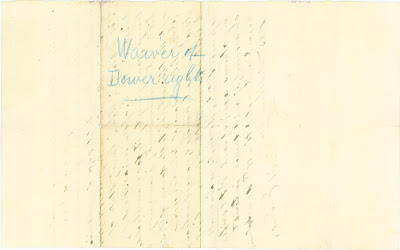 In March, I posted three transcriptions of Louis Curdt's 1885 waiver of dower of Elizabeth (Walz) Curdt.  At the time I came up with a couple of ideas for where the original might be.  It turns out that I have one and didn't know it. Apparently when I sorted through all the documents, I didn't notice that I had two different sets of these waivers.  Well, now I know!

This sheet of paper is 7 1/2" x 12 1/2".  It's about 20# weight.  It has an embossed logo of some sort in the upper left, but I can't read it.  (I'm going to scan it at 600 DPI and see if that helps.  If not, I'll go for 1200.)  The embossing was so strong that it cut through the paper in one place.  The sheet has been folded multiple times, in different places.  On the main text side, the only ones that seem to be visible in the scan are the two horizontal lines that divide the page into approximate thirds.  On the reverse side, which has only "Waiver of Dower rights" in blue pencil, the folds framing the text and one that bisects that section can be seen clearly. 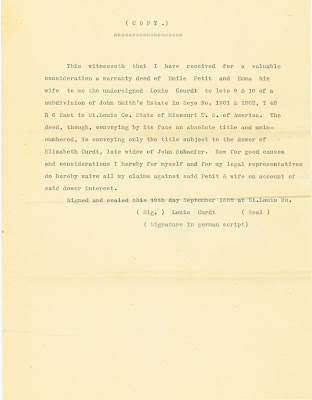 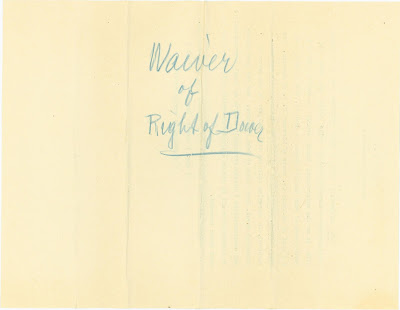 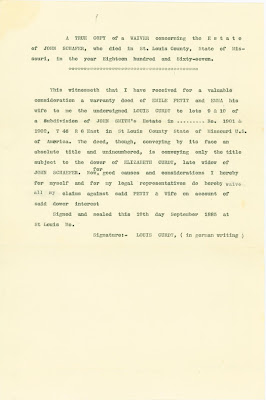 These are copies of two of the three transcriptions I posted in March.  The upper one is the original typed version of the third transcription from March (which now that I have this one in hand I've looked at again, and it is a carbon copy).  This sheet also has a "DEPOSIT BOND" watermark and is the same size and color as the March item.  The page has two more folds than the carbon copy does.  The only difference between the two transcriptions is that the name "Louis" in the signature line is slightly lower in the carbon copy.  The name was typed directly with the typewriter.  It looks as though the carbon copy name was erased first, but I'm not totally sure.  One other difference is that this page has "Waiver of Right of Dower" in blue pencil on the reverse side.

The lower image is a carbon copy of the second transcription posted in March.  This sheet is the same size, 8 1/2" x 12 1/2", appears to be the same weight and color, and has folds in the same places.  The differences between these two documents are the handwritten word "Sections" in blue pencil on the original typed page (the March copy) and slightly different placement of the words "all my" in the next to last line of the long paragraph.  Now that I have the two pages next to each other, I can see that the original typed version had something else typed there that was removed and then "all my" typed in.  On the carbon copy, it appears that whatever was typed with the carbon paper was erased and "all my" typed in its place.

So altogether I have an original handwritten copy of the waiver from Louis Curdt, three typed transcriptions (all differing slightly in wording), and carbon copies of two of the transcriptions.  Someone in this family (I'm still guessing Jean) was just a little obsessive about having extra copies.  Of course, now that I have a handwritten copy, I just have to transcribe it and compare it to Jean's work.

This witnesseth that I have received for a valuable consideration a warranty deed of of Louis Emile Petit and Emma his wife to me the undersigned Louis Curdt to lots 9 & 10 of a Subdivision of John Smith's Estate in Seys[?] No 1901 & 1902, T 46 R 6 East in StLouis [sic] County State of Missouri U. S. of America.  The deed, though, convoying [sic] by its face an absolute title and unincumbered [sic], is conveying only the title subject to the dower of Elizabeth Curdt, late widow of John Schaefer  Now for good causes & considerations I hereby for myself and for my ligal [sic] representatives do hereby waive all my claims against said Petit & wife on account of said dower interest

Even though this might be Louis Curdt's original signature (it does seem to be different handwriting from that on the rest of the page, although I don't know if it's "German" script or writing, as Jean typed in his transcriptions), this does not appear to be the original document.  The word "seal" surrounded in curlicues suggests that this is a handwritten copy of an original that had a seal on it.  Unfortunately, this copy is not dated, so there's no way to tell if it was made around the time of the 1885 waiver or when Elizabeth Curdt died in 1919.

At least now we know why Jean had "Seys" in one of his transcriptions — that is certainly what it looks like to me in this original.  At first I thought that the "y" didn't look like other "y"s in the document, but then I found a couple that looked at least similar.  And if it isn't a y, I have no idea what it could be.  Maybe there is yet another "original", which might be more legible.

Overall Jean's transcriptions are all very close to the handwritten copy, although he did correct the spelling of "legal" every time.  Certainly no significant deviation was made, and the meaning is the same across all three.  The only major difference is still Seys versus Sections versus Surveys.
Posted by Janice M. Sellers at 11:34 PM