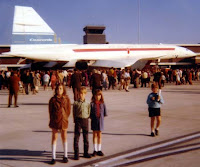 Recently two different influences on my blog came together in a way that made me write this post.  Randy Seaver's Saturday Night Genealogy Fun theme had people writing about homes in which they have lived and which ancestor moved the furthest during his lifetime.  And the California Genealogical Society invited Craig Siulinksi to teach a class about writing one's life, in which he suggested that attendees each write about a significant event in our lives.  Having those ideas running around together in my head made me focus on a significant move.

As evidenced by the post about the homes in which I've lived, I have moved many times in my life.  My family moved so many times when I was a kid, my mother was nicknamed "the wandering Jew."

One of the most significant moves came early in my life, when my family left the United States and lived in Australia for two years.  We did this through a potential immigrant program sponsored by the Australian government.  I don't know how many groups might have been targeted, but the relevant one for my family was tradesmen.  My father was a talented and accomplished mechanic and apparently fit in well with what the government was looking for.


I don't remember any of the preparations leading up to the move, because I was just eight years old and my parents handled all of that.  My father has told me one thing he had to do was go to San Francisco for an in-person interview at the consulate.  His opinion was that they wanted to make sure he was white; I don't know if that's valid or not.

We flew to Australia in March 1971.  The first leg of our journey was taking a helicopter from Ontario Airport in far western San Bernardino County to LAX, where we would catch a plane.  The three of us children were thrilled that we could look out the windows of the helicopter in all directions, but my mother, who was pathologically afraid of heights, had her eyes squeezed tightly shut the entire trip.  She kept telling us she didn't want to hear about what we could see down on the ground.

The airplane we flew on was a Pan Am Boeing 747.  Those were relatively new at the time, and I think it was pretty fancy, but I can't recall anything specific about the flight other than that we had to stop in Hawaii to refuel (which nowadays sounds amusing to most people).  And illogical as it seems, my mother loved to fly, as long as she was not sitting by the window.

I have only vague memories of our earliest times in Australia.  The first place we lived was an apartment.  I think that's where we were when my parents bet each other who could stop smoking longer.

Some background:  Both of my parents had smoked my entire life.  My mother's best friend smoked also.  When we were younger and my mother asked us children what we wanted for Christmas, we would say in a chorus, "We want you and Daddy to quit smoking."  To which my mother would reply, "Yeah, right, what do you really want?"  Well, be careful what you wish for.

So the bet was on.  My father gave up after three days.  My mother, who was more than a little stubborn, stuck with it.  Unfortunately, she became grumpier and grumpier (a very polite term for how she was acting) and ever more unpleasant to be around.  Eventually, my brother, sister, and I all begged her, "Mommy, please start smoking again!"  (The smoking is what eventually killed her, but she was absolutely miserable without her cigarettes.)

Next we lived in Maroubra Junction.  The main thing I remember about this location is that my mother worked at a Greek deli for Mr. Kringas.  One time when I was there Mr. Kringas asked if I could read.  At 9 or 10 years old, I proudly said I could, and he promptly handed me a newspaper — but it was in Greek!  He thought this was a great joke, but maybe that's what motivated me to learn the Greek alphabet.

As for the photograph at the top of this post, according to my father, "The Concorde was on a world introduction/promotional tour.  Being an airplane buff, I decided we should go see the beast.  Everyone was duly impressed and your Mother was already scheming up how to get a ride.  When we later found the going rates for SST travel, that plan was quickly discarded."  The photo of my siblings and me in front of the Concorde was taken at the airport in Sydney.  According to this history of the plane, the date was June 17, 1972.  (Isn't the Web wonderful?)
Posted by Janice M. Sellers at 7:42 PM