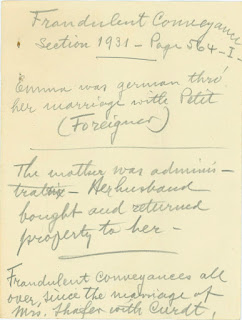 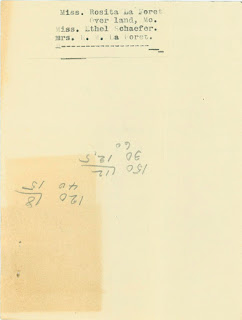 This piece of paper is 5" x 6 1/2".  It's a dark cream in color, with one section on the back that's orangish, where something, probably a business card based on the size, was pinned previously.  It has no watermark but seems to be of decent quality.  It might be writing paper, such as people used to use when letter writing was more common, although it's perhaps a little small for that.

There is handwriting on both sides, although the writing on one side is minimal, only numbers.  That side also has some names typed on it.  The handwriting appears similar to that of Jean La Forêt from his journal entries.  It also would seem to be his writing because it refers to Emma in the third person.  As some of the writing is a little difficult to read, I'll transcribe the entire side:

Emma was german thru
her marriage with Petit
(Foreigner)

Fraudulent conveyances all
over, since the marriage of
Mrs. Shaefer with Curdt,

This appears to be more information that Jean had noted for his and Emma's fight against Emma's half-siblings in the dispute over the split of Elizabeth Curdt's estate.  The reference to fraudulent conveyance seems to be from The Revised Statutes of the State of Missouri, 1899, which was cited on a document discussed a month ago.  Section 1931 is "Fraudulent conveyance" and does appear on page 564 in that edition.  I don't know how useful of a tool it was going to be in the La Forêts' fight, however, as it carried only a misdemeanor conviction.

It was not necessarily true that Emma became a German citizen through her marriage to Emile Petit.  Until the law was changed in 1907, whether a woman's citizenship status changed to that of her foreign husband was decided on a case-by-base basis.  What would have caused her to lose her citizenship was leaving the country.  When the act of March 2, 1907 went into effect, Emma's divorce from Petit was already in process; it was finalized in March 1908.  But even if she was considered a foreigner based on that marriage, her subsequent marriage to Jean in 1908 (a mere two months after her divorce) made her an American citizen again, because he had naturalized in 1890.  So well before the time Emma's mother died and all these disputes over the estate arose, Emma was no longer a foreigner.

The broad overview of the Schafer estate included the information that Elizabeth had been the administratrix of her deceased husband's estate.  That same document mentioned that Louis Curdt had sold the property back to Elizabeth after they were divorced.

The accusion of fraudulent conveyances since Elizabeth married Louis Curdt is interesting, primarily because it's so open-ended.  I'm guessing he was referring to the pressure to have Emile Petit and Emma sign away their rights to the Schafer property.  It's hard to tell if the punctuation mark at the end of the sentence is a period or a comma, as Jean seems to have used them almost interchangeably.  If it was intended as a comma, this thought does not continue on the other side of the paper.

That other side doesn't have much information on it.  Typed at one end are three names:  Miss Rosita La Foret (daughter of Jean and Emma), Overland, Missouri; Miss Ethel Schaefer (first time we've seen her name; perhaps the daughter of Charles and Alvina [Curdt] Schaefer?); and Mrs. E. M. La Foret (Emma).  Nothing else is there, so there's no way to tell why the names were typed.

Written in the middle of the page and upside down from the names are some numerals with absolutely no context.  Jean must have been trying to figure out some amounts connected with the estate, but he left no clues to follow up on.
Posted by Janice M. Sellers at 10:33 PM