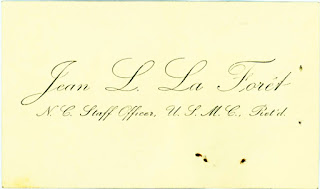 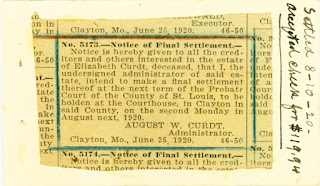 This is a calling card that is 3 3/4" x 2 1/4".  It is made of fairly heavy card stock.  It is yellowish-brown and has some staining or discoloration in the lower left corner (which doesn't show up when I look at the card itself).  It also has holes that appear to be from two straight pins that were stuck through it (although I don't think it had pins in it when I received it).  A newspaper clipping has been pasted on the back of the card, and that side has some handwriting.

The back of the card has a copy of the same "Notice of Final Settlement" pasted on it, with blue pencil outlining the notice.  It also has a note in what looks like Jean's handwriting:

That dollar amount has come up before also.  It appeared in Jean's notes on the breakdown of Elizabeth Curdt's estate, with his comment that it should have been $133.35.  It's the amount that Emma, Elizabeth's daughter, accepted as her portion of her mother's estate. This piece of newsprint is 5" x 7 1/8".  It has been torn out and has rough edges on three sides.  The right side appears to be the edge of a newspaper page.  The section that was saved is the "Probate Court Docket", with Tuesday, August 10, 1920 as the first date listed.  Underlined in blue pencil is Estate "5173 Curdt, Elizabeth", with "Aug W Curdt" under "Admrs. and Extrs." (Administrators and Executors).  It was folded down the first column, maybe to fit in an envelope, but that doesn't appear to show up in the scan.

Pasted on this piece is yet another copy of the "Notice of Final Settlement" dated June 25, 1920.  (I'm really starting to believe that Jean La Forêt had a pathological fear of losing paperwork.)

The August 10 date matches what Jean wrote on this card, on the card posted earlier, and in his notes on the estate.  While the $119.94 amount matches that on Jean's notes, it does not match what he wrote on the first card, which was 119 98/00.  So there's a difference of 4 cents for some reason.  I'm leaning toward the $119.94 figure being what Emma actually accepted, since that's in Jean's breakdown, but there's no way to tell for sure just from these items.

None of these clippings has any note saying from which newspaper it came.  The announcement of Elizabeth Curdt's death was said to be in the St. Louis Daily Globe-Democrat, so maybe these were published there also.

And sometimes I'm really slow, but I figured out tonight what the N. C. probably stands for on Jean's calling card:  "Non Commissioned."  It took a while to sink in because I've never seen it abbreviated in that way.  But Jean was a noncommissioned officer (NCO) in the Marines, so it makes sense.

These two items were next to each other in the original pile of papers I received.  I kept them together because they both have the "Notice of Final Settlement."
Posted by Janice M. Sellers at 9:21 PM